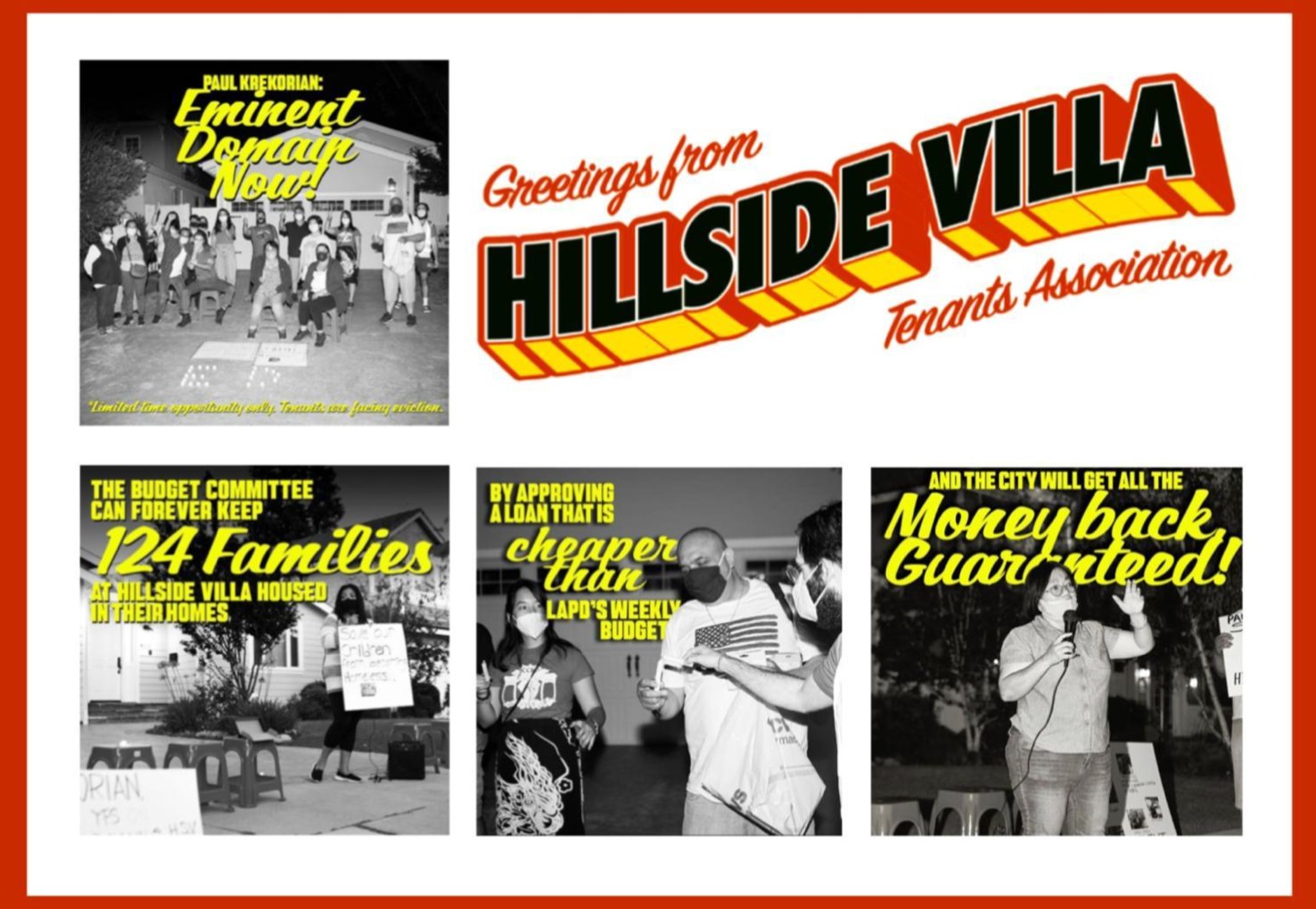 Hillside Villa Tenants Association is a multi-ethnic, multi-generational, multi-language collective that’s been fighting for almost 4 years to stay in their homes and keep them permanently affordable.

On September 13, 2021, with the assistance of Chinatown for Equitable Development (CCED) and the Los Angeles Tenants Union (LATU) and other anti-displacement activists and supporters, they lobbied the Los Angeles Budget Committee to  initiate a process to allow the city to exercise eminent domain to purchase the Hillside Villa (HSV) Apartments.

40 organizations support the call to use a loan to buy the Hillside Villa (HSV) apartments in Chinatown, to protect 124 families from becoming un-housed, to the protect the increasingly scarce low and very-low income housing inventory in the city and to save Chinatown from being completely destroyed by white supremacy and corporate greed in the name of “transit based density.”

At a cost of just $360k per unit, purchasing Hillside Villa is a much more economical method of securing truly affordable housing than building new units from the ground up. The Housing Element of the City’s General plan estimates that buying buildings with expiring covenants is approximately 20% less expensive than building new affordable housing.

The loan would be for less than the LAPD’s weekly budget! It would be paid back with Federal and State funds.  There is negligible fiscal burden on the City.

Eminent domain is a common tool to assist corporate development and displacement of oppressed people communities. It is why Chinatown is bordered by three major freeways and has some of the worst air quality in the U.S. It is why Mexicanos/Chicanos were displaced from Chavez Ravine.  It is why Metro Rail has displaced people in Brown/Black and Asian communities in Los Angeles.

This proposal of direct intervention is a win-win for the city, as the loan would be repaid by both Federal and State funds.

It is a direct alternative to the developer-serving “transit-based corporate density” tricks of state measures such as SB 9 and SB 10 which do not serve existing community interests. It is a chance for LA City Government to use existing power to serve the people rather than Wall Street financed interests.

In addition to the aforementioned support from 40 organizations, 289 Public comments were submitted to the Budget Committee in support of taking action to purchase HSV, whose tenants have been fending off exhorbitant rent increases and slumlord abuse for four years.

Many more phone calls were made and emails sent to members of the Budget Committee members urging the same.

So what happened during the Budget Committee meeting?

Apparently, the Budget Committee was too afraid to formally vote “no” to the loan, so they postponed the vote for another 30 days.

We must continue to build grassroots power to hold LA City elected official accountable to interests of the people rather than the interests of those who seek only to extract capital out of the Los Angeles economy to line their pockets and destroy our communities.

Please contact Chinatown Community for Equitable Development (CCED), Hillside Villa Tenants Association or L.A. Tenants Union if you have contacts in LA Council Districts 2 (Krekorian), 7 (Rodriguez) and 3 (Blumenfeld). More voters in those districts need to know how their elected councilmembers are failing the City of Los Angeles.

We must use the next four weeks to create the conditions for the Budget Committee to be too afraid to not vote “Yes!” 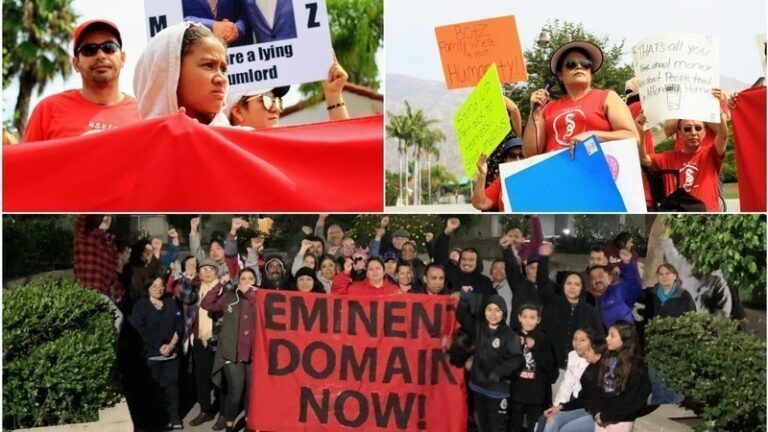 Some of the people supporting this effort: 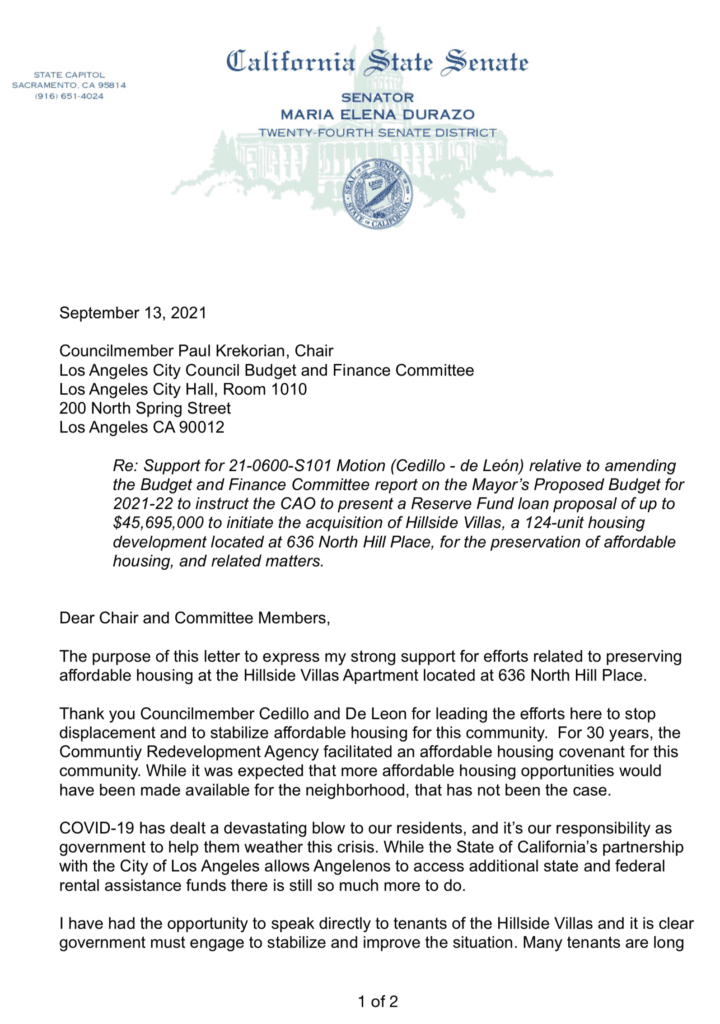 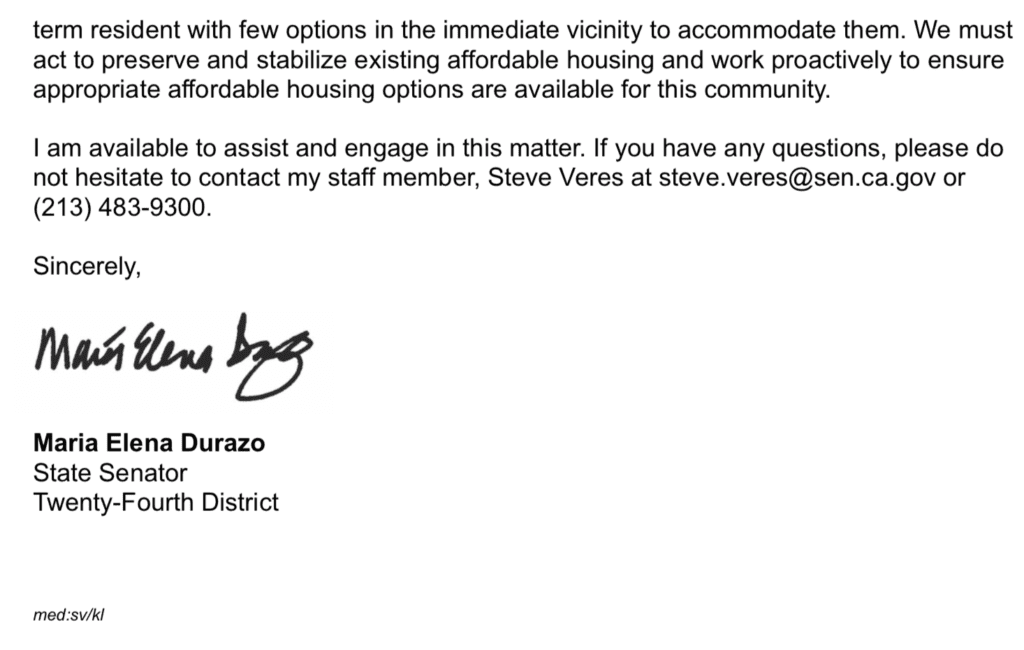