AB 854 Will Be Heard In Assembly Floor on Monday, January 31

January 12 Update: By a 6-2 vote, AB 854 advances out of the Committee on Housing and Community Development! Next stop is Commitee on Appropriations on January 20

Watch the video of the press conference by the HousingNow! Coaltion:

The Ellis Act was originally passed to protect small “mom and pop” landlords who could no longer tend to their rental property. However, speculators have used the Ellis Act to buy rent-controlled buildings, immediately “go out of the rental housing business”, and make a profit off of the eviction of long-term tenants. This has led to the displacement of hundreds of thousands of tenants and the loss of a major portion of our affordable housing stock. Since 2001, Los Angeles has lost 27,478 rent-controlled units due to the Ellis Act.  San Francisco has lost 5,478 since 1994. 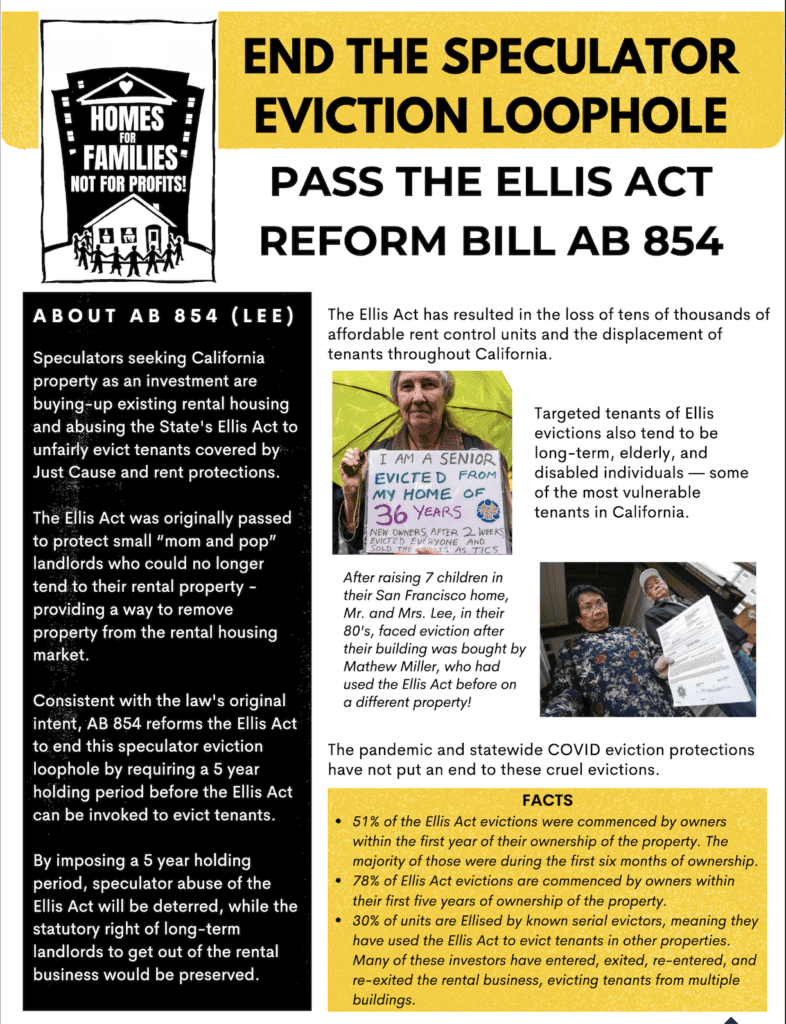 Archie Silvester and his neighbors are facing an Ellis Eviction in Los Angeles. “Escrow hasn’t even closed yet. The ink hasn’t even dried on the contract and the new owners are already threatening to use the Ellis Act,” says Archie. Many of Archie’s tenants are long-term, elderly, and disabled individuals that would have nowhere to go if they were evicted. Archie emphasizes that “landlords are abusing the loophole in the Ellis Act with a complete disregard for tenants rights.”

Maria and her four children moved into their three bedroom San Francisco apartment in 1978. After her children moved out, she rented out two of the rooms to Humberto and William. In April 2019, the new owner of the property, Mission Properties, LLC, evicted the tenants using the Ellis Act. After the eviction, Maria has had to move to Antioch and Bill has moved out of the State, as they could not find housing in the City. Humberto has been forced into homelessness after being evicted under the Ellis Act.

Patty Medina, is a disabled mother of three, domestic violence survivor and Section 8 recipient living in San Diego. Her elder daughter has autism, and her son was in the hospital after having a stroke. Her landlord has been trying to get her to move out of her home by increasing her rent $1,200 a month. Her landlord then sent her a 90-day eviction notice under the Ellis Act, after being unable to evict her on rent increases alone. She is finding it difficult to move to another apartment because many landlords don’t take Section 8 tenants.

Gabriel Guzman is a Marine Corps veteran living in Chula Vista. Gabriel and his wife both lost jobs due to COVID-19. Just one week before Christmas 2020, Gabriel, his wife and their children were evicted from their home, even though Gabriel had submitted a hardship declaration. They were homeless for a month. Now, Gabriel and his family are in a new home, but find themselves facing eviction yet again. A couple of weeks ago, Gabriel received a 60-day notice to vacate from his new landlord, claiming “owner move in” – a similar situation to an Ellis Act eviction.

AB 854 is authored by Assemblymember Alex Lee (D-San Jose) and sponsored by the Tenderloin Housing Clinic and the Coalition for Economic Survival. Assemblymembers Richard Bloom (D-Santa Monica) and Phil Ting (D-San Francisco) are co-authors of the legislation.

“Property speculators are abusing the Ellis Act to evict and flip units for profit. We are losing much of our affordable housing supply by allowing this to continue,” says Assemblymember Alex Lee. “We must ensure that people stay housed during the housing crisis.”

By imposing a five-year holding period before the Ellis Act can be used, speculator abuse of the Ellis Act would be deterred, while the statutory right of long-term landlords to get out of the rental business would be preserved.

Please send in letters of support for AB 854 NOW: https://bit.ly/YesOnAB854